Kratom is a psychoactive drug derived from the leaves of the kratom plant (Mitragyna speciosa) that has been widely used in Southeast Asia — especially Thailand, where it is now banned — as a recreational drug. But it has recently become popular in the West for its supposed medicinal purpose. The drug is known for its sedative effects, but in low doses, it also acts as a stimulant.Reports of effects vary, but some usera report feelings of stimulation, euphoria, sedation & pain relief.

Expert Kratom is best in it’s class more effective than other brands comes in various strains.It comes in powder and Capsules.

Remarkable Herbs is all about the Herbs, specializing in Ethnobotany. We strive to provide you with the rarest, and freshest Herbs, seeds, bark, roots, extracts, and smoking blends. We import plants and extracts from all over the world, direct from growers, and harvesters. Shamanic Herbs, Holistic Herbs, Entheogens, and Synergy.

Medicine Man is a affordable and more effective kratom in market.

Some of the highest quality on the market. Our company currently offers 2 different strains : Indo & Bali.
These strains come in packages of 5, 10, 20, & 50 grams each.

Earth is around since 1999 and still growing it’s market just come in and try this awesome brand.

Another brand we have on our shelves. Tiki Kratom has a high demand for it’s effectiveness.

THE leader in the kratom industry. You know will will get High Quality, Potent & Effective Kratom when purchasing OPMS products. OPMS also tests all Kratom batches for heavy metals, feces, salmonella, and mold content. O.P.M.S. also fine screens all ...

END_OF_DOCUMENT_TOKEN_TO_BE_REPLACED 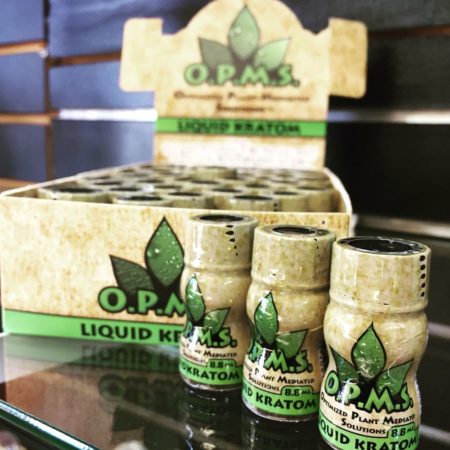 OPMS Liquid Kratom, form of this herb, is the most potent. Manufacturer offers its users a measurable way of enjoying the effects. OPMS Liquid Kratom USED : To control or lower the blood pressure ...